Known as New Zealand's adventure capital, Queenstown has something for everyone. For the adrenaline junkies there is bungy jumping, jet boating, white water rafting, skydiving, parapenting and much, much more. For those who are after a more relaxing getaway, the area also offers a multitude of bush walks, lake cruises, scenic flights, wineries and fashionable cafes and restaurants.

In winter the town draws skiers and snowboarders from all over the world to its popular ski areas Coronet Peak and The Remarkables, both within ½hr of Queenstown. With the town of Wanaka only 45mins away and the popular ski-fields of Cardrona and Treble Cone close by, Queenstown has a huge variety of skiing options to suit everyone.

Experience New Zealand flightseeing at its best with a Milford Sound flightseeing tour from Air Milford. Or choose from its fun, friendly and exclusive flight seeing tours of Doubtful Sound, Queenstown, Mt Cook and the Catlins. Air Milford are proud to operate the only turbo Cessna Caravan in the Queenstown area. This state-of-the-art aircraft offers passengers excellent views whilst enjoying smooth, quiet air-conditioned comfort and luxurious leather seats.

Air Milford is a personalised aviation company, which prides itself on offering visitors to New Zealand personalised flightseeing tours. You can also charter flights and enjoy even more of the dramatic scenery of New Zealand's Fiordland, Southern Alps and Catlin’s regions. All tickets are available from Gateway Apartments Queenstown New Zealand.

The Nevis Arc
The World's Highest Swing! Located next to the Nevis Bungy in the Nevis Canyon... Swing Forwards, Backwards, alone or with a friend. You will be suspended high above the valley floor and be released or release yourself. Experience a massive rush of adrenaline as you find yourself accelerating through the valley at mind blowing speeds in a 300 m Arc!

The Nevis Bungy
Begin your adrenalin packed adventure here with 8.5 seconds of falling it's a breathtaking ground rush like no other. Come stand on the edge and face your fear in what is for many one of the greatest personal challenges of their life. Make no mistake, The Nevis Bungy is not for the nervous.

The Ledge Bungy
As the only urban Bungy in Queenstown, it was clearly their duty to make it as crazy as possible. The Ledge Bungy is like no other in that it comes equipped with a 'runway' to launch you out 400 meters over Queenstown. Mix it up with some freestyle action. Twist, flip, spin, dive and possibilities are endless. Located at the top of the skyline Gondola this bungy jump has by far the best backdrop…… Queenstown!

The Ledge Sky Swing
And now for something completely different... Remember the swing you had in your back yard? Well the Ledge Sky Swing takes that to a whole new level. In fact a level 400 meters over Queenstown. 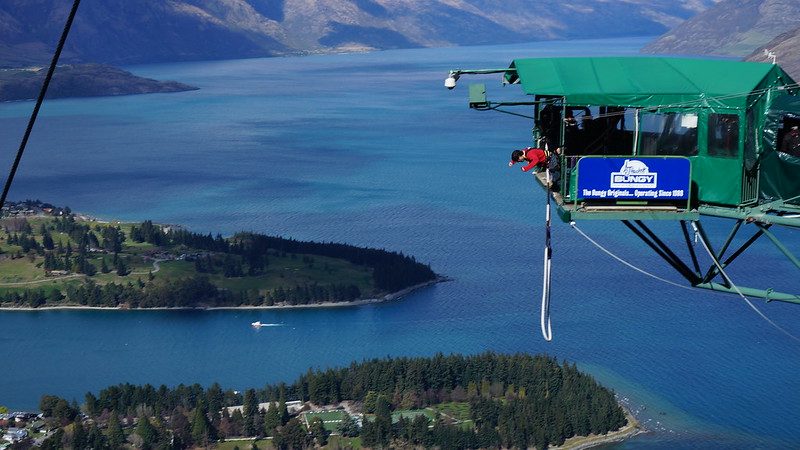 Canyoning (canyoneeringin the U.S.) involves travelling down creeks or streams within a canyon by a variety of means - walking, scrambling, climbing, abseiling and swimming. Canyoning is an all weather activity.

New Zealand’s Queenstown Canyon – 12 Mile Delta
After a short drive it's only a gentle ten minute walk through native bush to the lakeside scenic reserve. This high walled canyon of mica schist is where our Canyoning experience begins. Descending into canyons, plunge into pools, cascade down chutes, abseil waterfalls and swim narrow passageways.

New Zealand’s Routeburn Canyon – Glenorchy
A scenic (45 min) drive to Glenorchy at the head of Lake Wakatipu brings you to the Routeburn Valley. In this hidden spot you'll find yourself in harmony with a spectacular environment and enjoy some serious adventure. Tickets available at Gateway Apartments Queenstown New Zealand. 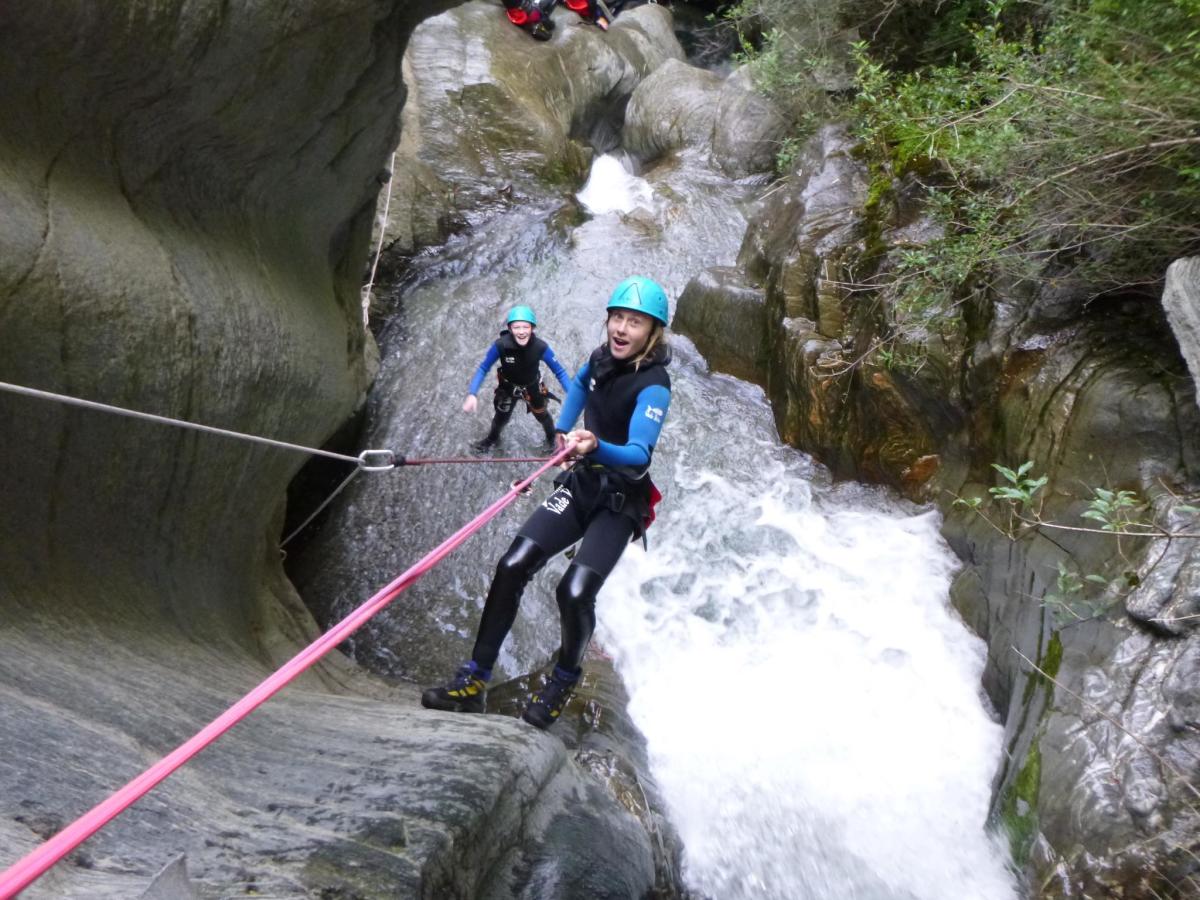 Cardrona Alpine Resort is a relaxed and friendly ski resort and snowboard resort located between Wanaka and Queenstown, New Zealand. Driving over the Crown range will save you time and also give you a chance to take in the breathe taking views of Queenstown. Gateway Apartments, Queenstown New Zealand provides pick up from the motel, driving time to this family friendly resort takes approx 3/4 of an hour.

Start with an exciting jet boat trip up the Dart River with all the thrills of classic shallow braided river jet boating complete with exhilarating jet spins.

Then disembark to begin your ‘Funyak’ canoe downstream journey through the Dart River Valley, stopping to enjoy a delicious wilderness buffet lunch as well as having the opportunity to explore the hidden side streams, rock pools and dramatic chasms such as the beautiful Rockburn.

This paradise journey is only 40 minutes away from Queenstown Book this direct at The Gateway Apartments, pick up available from outside with trips departing daily.

Queenstown New Zealand vintage steamship.
Relive the elegance of turn-of-the-century travel with a cruise on Queenstown’s iconic vintage steamship TSS Earnslaw. Launched in 1912, the TSS Earnslaw is the largest and grandest vessel ever to ply Lake Wakatipu. Today, the TSS Earnslaw is believed to be the only coal-fired passenger-carrying vessel still operating in the southern hemisphere. The TSS Earnslaw makes several trips daily across Lake Wakatipu to Walter Peak High Country Farm on the western shores, also a option to disembark for a farm tour, horse trek, heritage tour, BBQ lunch or evening dining. A cruise on this gracious heritage vessel is the perfect way to experience Queenstown’s magnificent alpine scenery.
Book your tickets at Gateway Apartments, trips departing daily.
More Info

Arrowtown Tour: Travel in exotic luxury visiting one of the true gems of New Zealand history. Built on the banks of the Arrow River, Arrowtown retains a magical feel still capturing the spirit of the once bustling gold-mining township of the 1960's.

Cromwell Tour: Embrace some of the world's most breathtaking scenery as you make your way to Cromwell via Arrowtown. Enjoy morning or Afternoon tea with complimentary access to Highlands National Motorsport Museum. 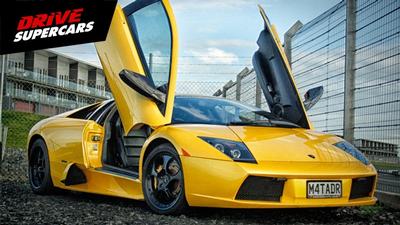 Tandem Paragliding over Queenstown New Zealand. Take an exhilarating Tandem Paragliding with flight from the top of the Skyline Gondola with 1 of their 15 professional local and international tandem pilots flying all year round. An adrenalised flying trip or a relaxed sightseeing tour - it’s your choice. Queenstown's G Force Paragliding is the only company permitted to fly from the Skyline Gondola over spectacular Queenstown and stunning Lake Wakatipu. We are one of the largest and most established tandem operators in the world, and the longest standing in Queenstown, Est. 1991. Book your tickets at Gateway Apartments Queenstown New Zealand, trips departing daily.

NZ G Force is Tandem Paragliding at its best!

Skydiving over Queenstown New Zealand.
Tandem Skydive Achievement doesn't come Sweeter! It takes a certain kind of person to jump from an aircraft at 15,000ft into thin air. It takes courage. Harnessed by space age materials to an experienced qualified Jumpmaster, you step out that aircraft door and for some 60 seconds you plummet towards the ground at 200kph, Terminal Velocity. The Jumpmaster will deploy the reinforced tandem canopy controlling your entire skydive. Of course this can only be experienced in Queenstown with the views over The Remarkables and Lake Wakatipu to make the package complete.

Expect sensory overload as your mind/body/soul fight against every natural self preservatory urge. Tickets available at Gateway Apartments, departing daily. 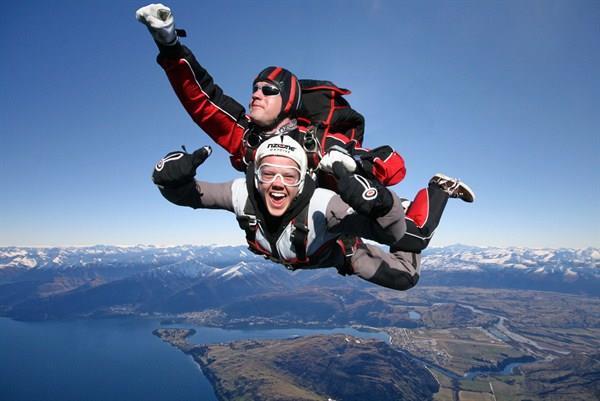 QUEENSTOWN, NEW ZEALAND SHOTOVER RIVER:
Take the winding road up into Skippers Canyon, famous for its incredible twists and turns, tight corners and exciting cliff edges. The journey into the canyon is part of the whole experience as the road has hardly changed since the days when the canyon was mined for gold. The Shotover River graded between 3-5 runs through Skippers Canyon and has a full safety briefing before its time to hit the water and raft the exhilarating rapids of the lower canyon. Book your tickets at Gateway Apartments and enjoy the best of Queenstown Rafting Queenstown, New Zealand. 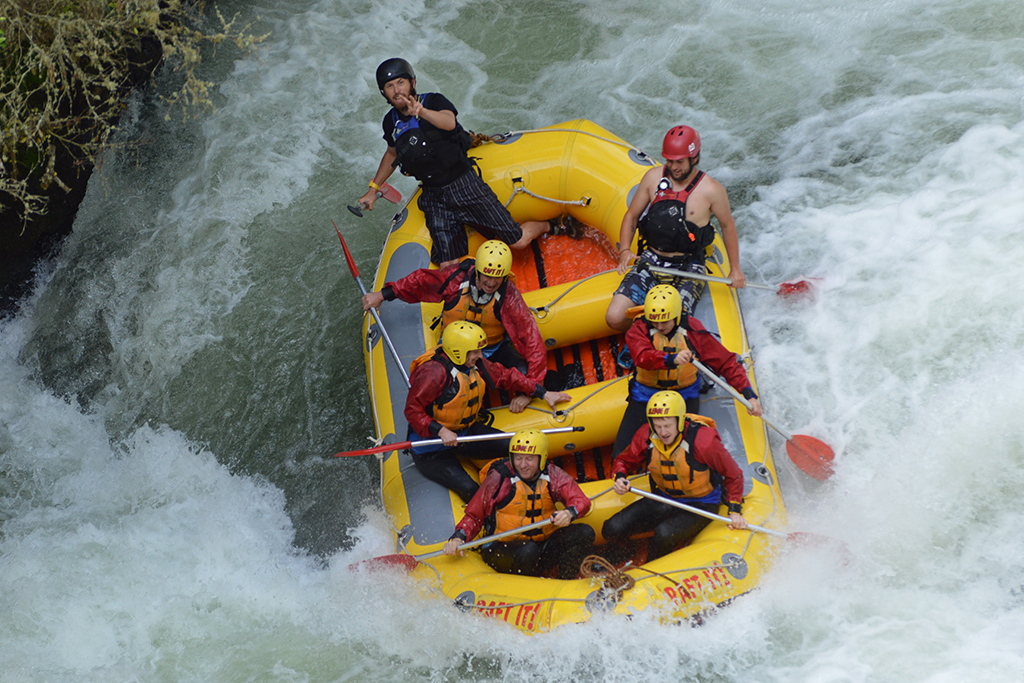 THE PEAK OF PERFECTION
One of Queenstown New Zealand’s best ski fields. Over 60 years of passion and a commitment to quality has created a world renowned ski area at Coronet Peak only taking 25 minutes from downtown a Queenstown. A multi-million dollar investment last year has transformed this much loved mountain, resulting in its elevation to true world-class status. The stunning new base building provides fantastic facilities and hosts magnificent views. A sense of arrival is embraced via a new entrance level which makes getting to the slopes easier and quicker than ever with a logical progression through the on-mountain services. Upstairs, the cafe, restaurant and bar areas open to a massive sheltered deck. A brand new, state of the art, fully automated snowmaking system helps Mother Nature in the providision of consistently good skiing and riding from early June till the end of September. Shuttles are available from directly outside Gateway Apartments and from the Frankton Bus Shelter. Skiing in Queenstown New Zealand has never been easier!

The Remarkables - ALPINE PARADISE FOR COMPLETE FAMILY FUN
For beginners, novices, youth and entire families The Remarkables ski resort is the natural choice taking 45 minutes from Queenstown. Its high alpine location, north facing sunny aspect, fantastic terrain parks, great snow and friendly, relaxed nature makes it a true alpine experience for all ages. Gateway Apartments is the closest motel to The Remarkables ski resort, just at the back door step. Gateway Apartments offers magnificent views of the Remarkables mountain range from most of our fully serviced self contained motel apartments. 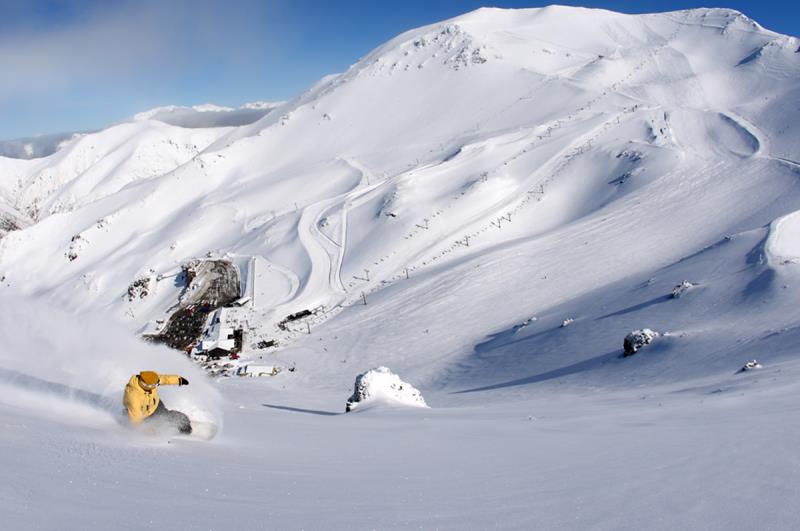 You will enjoy your exhilarating Jet Boat ride through the canyons of gold and blast through the spectacular canyon of towering rock right here in Queenstown, New Zealand. We are the only company permitted to operate in the world famous Skippers Canyon which allows access to remote places such as the site of the first incredible gold discovery, along with other relics that are otherwise inaccessible in the deep canyon. Getting there is half the fun. This really is New Zealand jet boating at its best, with great value for money and a guaranteed once in a life time experience, Skippers Canyon Jet is not to be missed! Pick up available from right outside Gateway Apartments, book your tickets at Gateway, trips departing daily.